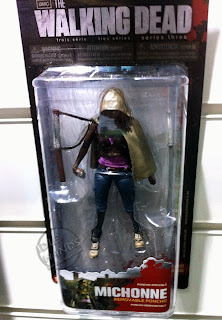 You know what's the worst thing about doing a show thousands of miles away? You can't point at something and yell GO GET MORE OF THAT!!  Today, that lack of pointy power became apparent while digging through UK Toy Fair images. It seems our cadre of ninja photographers came across McFarlane's Walking Dead TV Series 3 action figures but, not being horror fans and only familiar with pics we had posted, they said "We've seen these before...moving on.." Sad panda. Luckily. I'd asked them countless times to shoot a couple of shots here and there just in case, when in doubt. SO..the good news is we can see what the actual TV Series 3 figures look like in person. The bad news is they are allllmost Yeti shots (a term you should be familiar with by now, referring to an object fleeing the camera, resulting in a blurry blob of varying degrees.) Oh well. They aren't all too bad. For better or worse, here are the goods with our info from a past article...

Michonne - Michonne is the mysterious stranger who saves Andrea from walkers with her katana blade and two pet walkers in tow. She is a quiet, but fierce warrior. This action-figure comes with 24 points of articulation, removable poncho, katana sword and katana sheath.

Michonne's Pet Zombies - Connected directly to Michonne’s past, she has rendered both these walkers harmless by removing their bottom jaw and arms. Now that both Pets are somewhat subdued, she puts them to good use as pack mules and zombie repellant. Both Pets come with removable backpacks, neck chain leash, arms and bottom jaw. As an added bonus Pet 1’s backpack comes with a removable shotgun. 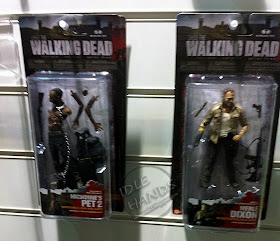 Merle Dixon - Left for the dead in Season 1 by Rick and the rest of the survivors, Merle Dixon, the estranged brother of Daryl Dixon, makes his full return in Season 3 and this time he is re-armed and ready for action! This action-figure comes with 20 points of articulation, prosthetic arm w/ removable bayonet, assault rifle, pistol and knife.

Autopsy Zombie - In a desperate attempt to find Sophia, the Autopsy Zombie becomes another victim of Daryl’s crossbow. In one of the most gruesome and riveting scenes to date from the series, Rick and Daryl perform an autopsy on this newly fed zombie to find out the contents of his stomach. Zombie includes a knife and removable shirt to reveal either a partially digested hand and/or woodchuck carcass! 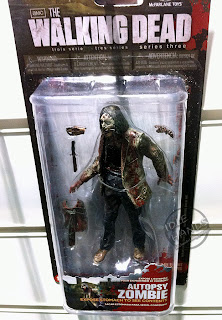 Up next McFarlane will be rolling out Comic Series 2 (Finally!) in July with... 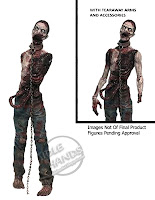 Michonne's Pet - It’s not until Mike, Michonne's boyfriend, is bit by a zombie that Michonne discovers the true nature of the zombie epidemic. A bite is a death sentence! Michonne quickly realizes that Zombies don’t attack other Zombies and uses Mike as camouflage and protection against the hordes of the undead awaiting her in this new world. Michonne’s Pet Zombie features 17 points of articulation and includes a neck collar & chain, tear off arms and jaw, and push in/ pull out intestines. 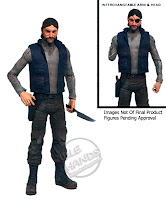 The Governor - Zombies are not the only threat to Rick and his band of survivors, the Governor is truly the first human antagonist that the group encounters within the comic series. The Governor features 28 points of articulation and includes a kitchen knife, pistol, and alternate mutilated head and right arm. 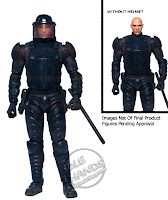 Glenn - Glenn, an original Atlanta survivor, has become crucial to the survival of Rick’s group due to his ability and agility at getting in-and-out of zombie-infested areas in order to search for food and supplies. Glenn, in full riot gear, features 28 points of articulation and is equipped with two pistols, riot shield, baton, gas can, and removable helmet with flip-up visor. 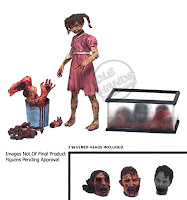 Penny, The Governor's Daughter Zombie - Nothing is stronger than a father daughter bond, as we see with The Governor and his daughter Penny. Infected early on with the zombie virus, Penny has been cared for and fed by her unconditionally loving father. Penny features 12 points of articulation and includes a bucket of fresh body parts (severed leg, severed foot, severed hand, intestines, heart and Rick’s severed hand) that the Governor feeds to her. Figure also includes a fish tank with trophy heads collected by her father. One of the heads can be used as an alternate head for Michonne’s Pet Zombie Mike, allowing you to build Michonne’s 2nd pet and Mike’s best friend, Terry.

Bloody Black and White Governor with Zombie Daughter 2-Pack - Staying true to the comic, this blood-splattered black & white version of The Governor & Daughter Zombie is the perfect addition to any The Walking Dead collection. This box set still includes all the articulation and gory accessories included with the standard figures.


Also coming soon are TV Series 4, TV 2-pack series 1, and a Comic resin Statue. We're sure to see at least some of this in February at New York Toy Fair, so..to be continued...

Missed series 2? Check out the pics HERE and make your zombie hunting list. More Toy Fair 2013 on the way!