Doctor Who Actors Meet Their Minis 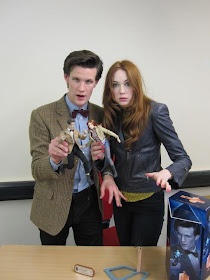 As they draw closer to a release date, Big Chief Studios met with Matt Smith and Karen Gillan (the Doctor and Amy Pond, natch') to snap some shots of the duo with their 12 inch action figure counterparts.

For those new to the line, here's the skinny from Big Chief from their initial product announcement...

BIG Chief Studios Ltd. is proud to announce a licensing deal with BBC Worldwide to produce a range of high-end collector 1:6 scale figures and 1:4 scale mixed media statues, based on the flagship TV series Doctor Who. The agreement includes rights for both the current series starring Matt Smith as the Eleventh Doctor and the classic series’, from the very first Doctor William Hartnell, through to David Tennant.

Initial product offerings will include highly detailed 1:6 scale versions of the Doctor (Matt Smith) and his companion Amy Pond (Karen Gillan). Both figures will be fully articulated for maximum poseability and will feature authentic hand-painted character portraits, finely tailored costuming, signature accessories and themed display bases. To complete the first wave, other popular characters including Rory Williams and River Song will be released.

Key monsters and aliens from the hit TV series will also be released. Additionally themed 1:6 scale dioramas depicting the sets from the show will be introduced for collectors to create displays for their figures. 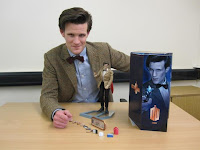 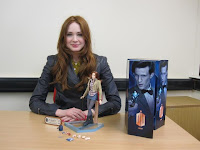 Mark Andrews at Big Chief Studios commented on the meeting and photo shoot...

"Both Matt and Karen were amazing, we have had the pleasure of meeting them both separately before, but together their chemistry is electric. Matt is a whirlwind of enthusiasm and he positively gushed about the figure. Karen too was really complimentary and so happy to see her figure, as she had only previously seen the final head sculpt. They were blown away by the detail in the costumes and of course their portraits. Matt kept saying "I pull that face don't I, that's me isn't it." the crew members with them were equally complimentary. In fact they even asked whether the shot on the back of the pack was of Matt and could not believe it when I informed them it was of the figure. We would like to extend our sincere thanks to Matt and Karen and the crew on set for their valuable time. Also huge thanks to Sarah and Edward for organizing the meeting. "

BIG Chief will begin offering the first two character releases in Q2 2012, both direct to consumer via their dedicated website and through select hobby and specialist retailers.

CLICK HERE for our super packed article on the line with interviews, images and expansion pack info!
IdleHandsBlog at 5:14:00 PM
Share