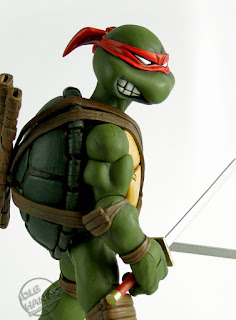 Ohhh Mondo. You are the ridiculously adorable kitten I can't help petting every time I walk past. Your movie prints are so damn cool, I'm positive there are power ballads out there singing their praises. Now you are getting into toys...and I want you to know...I love you. It's a real love. A manly love. Much like the love I have for pizza and the movie The Adventures of Buckaroo Banzai Across the 8th Dimension. You showed me an art toy rendering of Michelangelo of Teenage Mutant Ninja Turtles and my eyes grew wide with wanting. Then you showed me a massive Iron Giant action figure...and I wept openly...on New Jersey transit. It wasn't pretty sobbing either. It was the kind Peter Griffin rolls away silently from. Now, as San Diego Comic-Con 2015 approaches, we grab some time with Mondo's Creative Director for Toys/Collectibles Brock Otterbacher to see what they'll be unveiling at the biggest geek gathering on Earth...

An IRON GIANT UPDATE!!
Brock states "I'm aiming to have him shipping by the end of the year. It's a beast of a project, so I'm thankful for everyone's patience with it. We've got the sound all worked out, and will be previewing that soon.
With access to the original voice track, we went through a pulled about 8-10 different bits." I asked if Vin Diesel has made contact to come and play with this amazing toy, as he's a noted hardcore geek like us, but he's not knocked on the door yet. WHAT ARE YOU WAITING FOR VIN??!! There's an open invite and I'd jump on it!! Or just turn up at Comic-Con and wander over to introduce yourself to Brock. He'll be very happy to see you...and possibly invite you to play D&D.

First Hellboy Statue
In 1991, comic artist and writer Mike Mignola did a black & white illustration at a comic convention of a demon character that bore the name "Hellboy" on his belt. This was the genesis of the filed-horned fighter of the supernatural known and loved today. Mondo is excited to bring the original concept to life with a 12" polystone statue showcasing all the strange and fun details of the original drawing. In addition to all the sculpted details, original Hellboycolorist Dave Stewart was enlisted to design the color scheme for the piece. Now is a Hell of a time to bring this piece of comic history home! First Hellboy is currently available for pre-order at MondoTees.com ($200) in a full color RED and a comic book sketch BLACK and WHITE!

Sculpted by Matthew Black, color design by Dave Stewart, and killer paints on both pieces by Mike Najera. 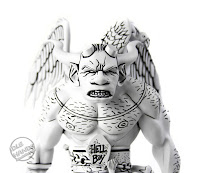 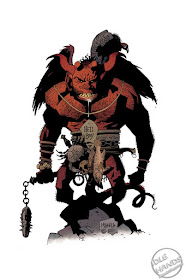 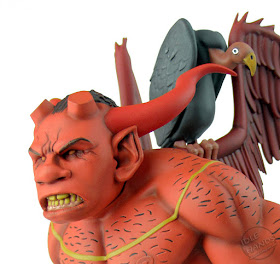 And now we get a sneak preview of Mondo's new 6th scale Teenage Mutant Ninja Turtle action figures!! These may instantly become your favorite TMNT toys of all time, so be warned...

Leonardo is the first in a series of 1/6 scale Teenage Mutant Ninja Turtle figures, inspired by the original Eastman and Laird comic book from the 1980s. Standing approximately 11 inches in height, and featuring 25+ points of articulation, Leonardo includes interchangeable hands, multiple accessories, and a choice of the classic red mask from the comics, or the famous blue mask from the cartoon series! All four turtles will be on display at Mondo's booth. (Price TBD)

Of course I had several hundred questions for Brock on this topic. My first revolves around a bit of toy industry folk lore. It seems that Playmates has had a stranglehold on the TMNT license for years now, and the licensor for our green buddies would see that this was the case for many more. At some point, this individual went on vacation, at which time his company was approached by NECA toys to make the now legendary classic Teenage Mutant Ninja Turtles action figures based on the original comic designs. The new guy deemed the project far enough removed from Playmate's core lines that he granted the license ...and off NECA went into the history books. Unfortunately, the lead licensor came back and put an end to the fun. but not nefore NECA could pump out colored and black and white versions of all 4 turtles and April O'Neil with some Mousers. I asked Brock what sort of sorcery Mondo used to get their own license, since Playmates has been known to make an oversized turtle from time to time. Miraculously, no magic spells were required! "We pitched the idea of doing 1/6 scale figures, inspired by the original comics (with some of our own twists thrown in). Nickelodeon saw that the style and price point were going to be so vastly different than anything anyone else was doing and immediately said yes."

The look of these new turtle toys is rather unique, with elements of the classic comic plainly visible, but other touches added as well. Brock explained "It's a combo of the original comic art, my friend and designer Joe Allard's concept work, then Irene Matar, the sculptor who did the first rough we showed at MondoCon last year, and finally taken to the next level by Ramirez Studios. We then had Mike Najera land the plane with his paint skills." You'll want to note Phil Ramirez worked on some of the original Playmate's TMNT toys, so who better? Here's how they turned out... 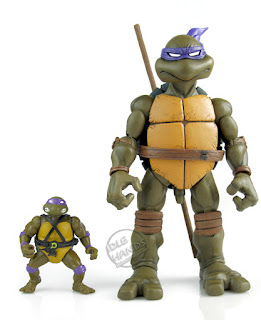 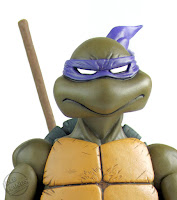 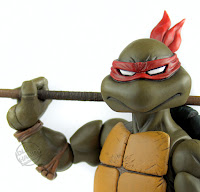 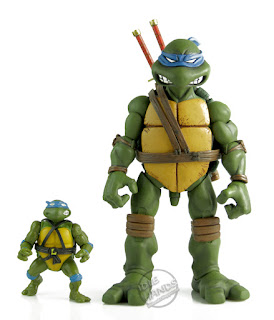 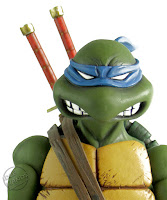 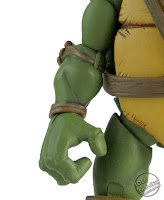 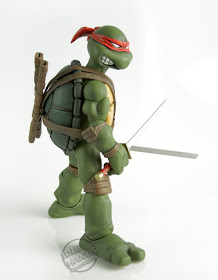 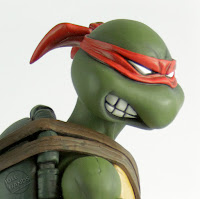 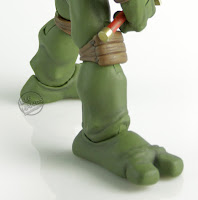 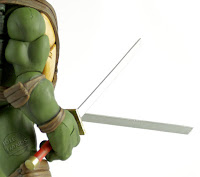 Playmates figures are NOT included, and are there just for comparison.

We asked about articulation on these, the mightiest of Turtle action figures, and while there was nothing ground-breaking attempted, Brock is pleased with the level of posability, being a life long toy fan himself. He's counted nearly 28 points (give or take a point) of ninja action. As for details, from the pictures alone, I think you'll agree these are fairly mindblowing. "We have them (packaged) with red masks, like in the original comics, but we're also including alternate heads with their cartoon color masks. This is part of the standard release, not some variant down the road. For each Turtle's MONDO exclusive, there will be a special accessory that's character specific. In the case of Leonardo, the first one we're releasing, it's Shredder's destroyed gauntlet, from issue #1." ..or maybe a Utrom? 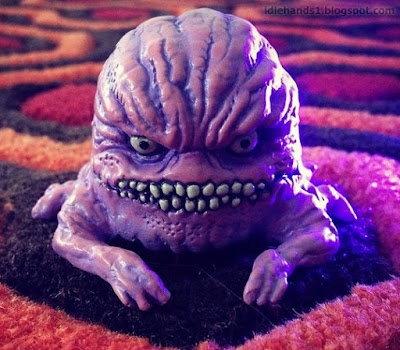 What's next? As usual, it's a matter of fans showing their love by buying the first releases, but there is definitely...A PLAN!! Brock explains "If all goes well, we're planning Casey Jones, Shredder, and The Foot after. All comic based, though that doesn't mean we won't explore other characters not from the comic. As long as it fits in the "Mondo style" we've chosen for the first four, which is a bit of comic, a dash of OG Playmates, and a sprinkle of the original cartoon."

...And action figures are just the beginning.

Might you have an interest in a 1:1 Casey Jones mask? Mondo has cooked up a sort of prop replica (mainly for display) based on several different versions of the iconic mask, with less emphasis on being accurate to one particular style and more about being a show piece that makes people go "HOLY DAMN THAT IS INSANE." I'm pretty sure they will succeed there. 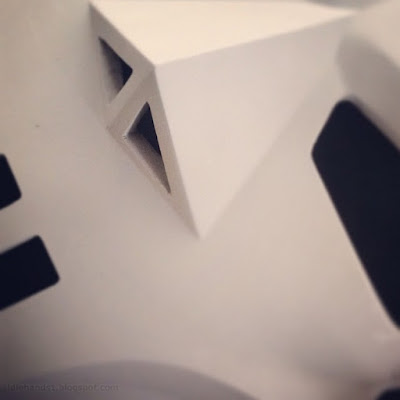 Also on display at San Diego Comic-Con will be a massive 16" GODZILLA based on the preview poster Phantom City Creative did for Mondo two Comic-Cons ago. I'm told your eyeballs will melt out of your head when you see it, so treat it like an Arc of the Covenant moment and send some kid over to test the waters first. Someone else's kid, of course. 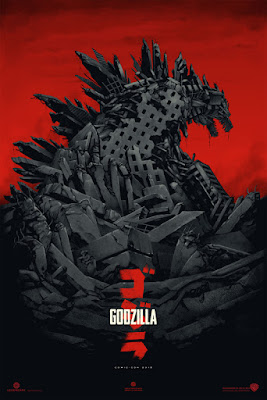 And now...here's the rest of Mondo's lineup for SDCC, including things you might actually be able to BUY at the show!

Here's a first look at the Ant-Man screen print from artist Kevin Tong. "In designing the poster, I wanted to show Ant-Man's scale, the intensity of his transformation, and really just trying to make a poster as fun and dynamic as the movie," said Tong.

The poster is printed on holofoil, a unique reflective surface, adding a dynamic element to the print. The regular version of the poster will be on sale at a future date via Mondo's official site. Mondo will be releasing a diverse selection of posters throughout the convention, including the debut of an awesome new license.

Aliens - Original Motion Picture Soundtrack
The Academy Award-nominated score for Aliens is an appropriate musical companion to this wildly successful sequel. Much like the film, the soundtrack is a departure from the original, but equally beloved. Composer James Horner took the reigns from Jerry Goldsmith and made something his own: blending the suspense and horror that the franchise is known for, with an element of fun that is unique to this entry.

This deluxe edition soundtrack features over a dozen cues that have never before been released on vinyl, including 5 bonus tracks. Commenting on the design, artist Killian Eng said, "I wanted the alien to play a big role but at the same time incorporate its shape into the materials of the space station, almost like it becomes the station itself, keeping the marines in a steady merciless grip." 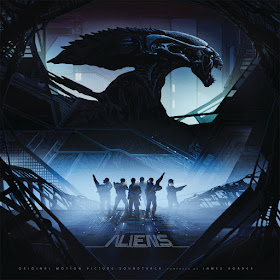 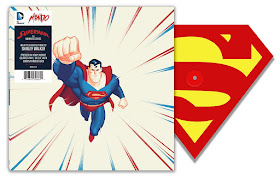 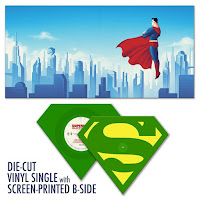 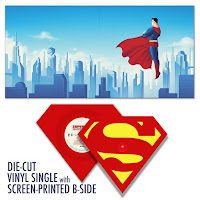 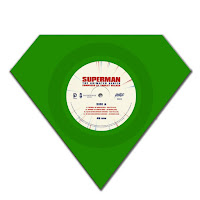 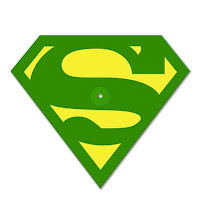 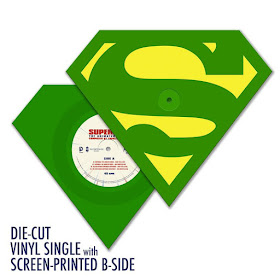 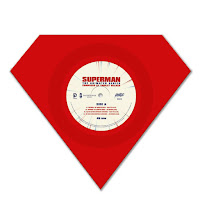 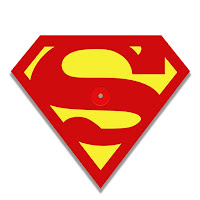 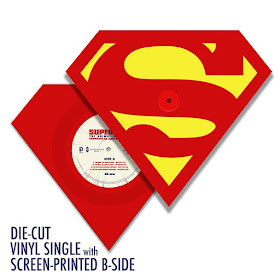 Check back here on the first day of San Diego Comic-Con for another preview of what's to come at this year's MONDOCON!! Note to websites looking for news: Please credit us. If you are grabbing pictures, please only grab half at the most of what we are showing and link back for the rest. We appreciate your interest and thank you for your cooperation!